Chavez Photo Remember a couple of years ago when an illegal mexican female showed up for college with a stolen Social security card and how the La Raza groups went all screechy about her rights?  Here we go again and last week a Woodburn Mexican was arrested for making fake ID.

While this typical Hispanic theft of stealing from Americans their ID, seems mexican, but in looking at her first name, she is either an illegal alien with more white ancestry then usual, or an illegal Cuban etc.
The name Jessica, means little, because many illegal hispanics ( mexican ) are giving their anchor brats and illegal children American names and I mean white American names like Kevin and Debbie so they will blend. Its sorta like the illegal alien uniform  of baseball caps for both breeders and brown rapists from Mexico. Or the Red White and Blue Christmas tree lights by the Illegal aliens near me. Mexicans never blend , get that straight.

Jessica Romero Chavez , age 21, of Tigard was arrested by Sherwood Police this afternoon and charged with two counts of Identity Theft and one count of Possession of a Forged Instrument. The arrest was made in connection with the use of a forged social security card. Police were alerted after a Salem resident reported he had lost government benefits when social security earning records indicated he was employed at a Sherwood business. The investigation revealed that Chavez had used a forged social security card containing the victim’s social security number. Chavez was taken into custody without incident and lodged in Washington County Jail. Each offense is a Class C felony with a bail of $20,000.00 each. 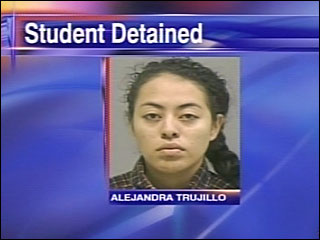