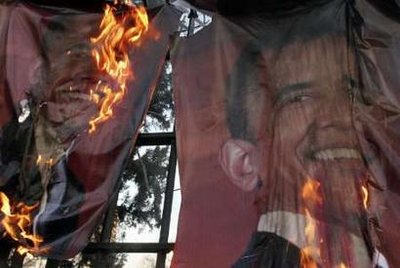 With over 22,000 violent homicides in his country in the past 4 years, and the toll rising, and more policemen, politicians and drug czars losing their heads, Calderon pleaded his case at the elaborate state dinner attended by a horde of Hollywood liberals and a special mariachi band flown in from Chicago along with a famous Kenyan chef noted for his elaborate Mexican food creations.

According to an aide with the State Department, Calderon is seeking permanent asylum and tax free status to live in San Antonio, Texas, where he has recently purchased a sprawling , walled 55 acre Hacienda, where he plans to maintain his everyday rule over Mexico using his Blackberry, 250,000 street cams, and the $400B stimulus recently promised to him by members of the House Banking Committee, and Treasury Secretary, El Senor Tim Geithner.

Calderon claimed, while seeking the stimulus, that unless he had the money, the drug cartels would be able to pay his law enforcement team and army generals more than the Mexican Government. The stimulus assures Calderon that he can at least keep his country afloat “for two more months’ before he is forced to call on the IMF and the UN for additional help.

Ignoring Mexico’s own stringent immigration policies, Calderon continued to rail against the 10 page law recently passed in Arizona which merely confirms that the state will start enforcing federal laws that have been on the books but ignored for years by Washington. 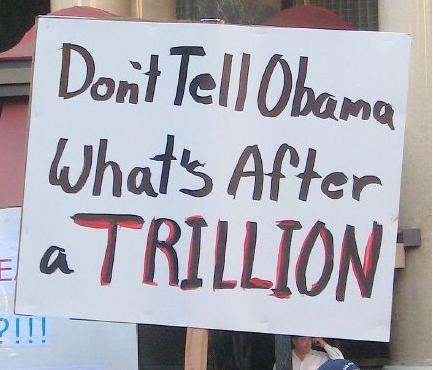 Mexico , which deports over 250,000 ‘illegal immigrants’ a year, has stringent measures enacted against non Mexicans and their enforcement agencies are charged with strictly enforcing them.

A few highlights of the measure demand that anyone coming into the country show evidence of self sufficiency on financial matters, and that anyone granted status CAN NOT PARTICIPATE IN ANY POLITICAL campaigns or DEMONSTRATIONS. All immigrants who apply for extended rights in Mexico must pass a rigorous test, and prove FLUENCY IN SPANISH.

Any immigrant who has any dealings with any Mexican official, MUST VERIFY his status in the country, ie: SHOW THEIR PAPERS.

The state dinner, only the second for Obama as he has refused to honor any of America’s FORMER allies, was closed to the press since the elaborate shindig was sure to cause an uproar with the millions of unemployed in the nation.

Michelle Obama said that a great deal of expense was saved by supplying many of the vegetables and herbs for the dinner from her own White House Hypocrisy Garden, and the two kids ‘helped’ hand make the thousands of butterflies that hung above the White House lawn to celebrate the Monarch butterfly migration to Mexico.

One wag whispered he thought that the butterfly symbolism was ironic, since it was ‘about the only wild life heading south into Mexico under the present circumstances.’

Joe Biden was heard to whisper to Bill Clinton, “I hope this isn’t going to be a big fucking deal, but those refried beans are making me fart….!”

The presidential families retired to the White House movie theater for a rerun of “Remember the Alamo”. Press Secretary Robert Gibbs said that Calderon was gratified that Obama pledged to name June 1 a holiday in remembrance of Mexican General Santa Ana, and also to put pressure on Taco Bell to sponsor a Poncho Villa ‘all you can eat taco day ‘ very soon.

Make Morse’s day – rate this story with the stars, they’re just down there!

0 Responses to Calderon Addresses Congress, Pisses on American Flag While Begging for Asylum!