Its nice to see that the White Guy who helped sell out South Africa hasn’t sold out all of his tickets. What hog-wash- reminds me of the new age gurus, who sell love as the solution to everything at xxxx$$$$ per ticket. They even have the Nordic choir singing black african songs. And no there isnt enough room for everyone on the planet, not if we have to feed house clothe and make life worthwhile.

The third worlders need to stop breeding. It is really irresponsible to send out the message that it’s okay for the blacks to keep popping them out or the mexicans, when Haiti was a prime example of the consequences of over-population.Peaceful end of apartheid? That’s not what I hear from South Africa Sucks. 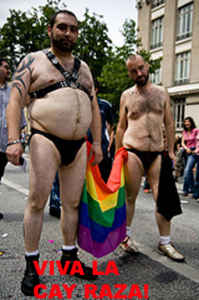 De Klerk will be in the state capital for a benefit for the Medical Foundation of Marion & Polk Counties’ MedAssist and Project Access Programs. His topic: The Challenge of the Century: Managing Diversity will explore what he feels are the primary sources of conflict in the modern world; religious, ethnic, and cultural differences among nations. Emphasizing that there is room and space for all of us on this earth, de Klerk discusses the important lessons of negotiation, management of change and leadership that led to the peaceful end of apartheid under his leadership. Focusing on the risks and sometimes leaps of faith involved in this fundamental agreement to bring lasting peace, de Klerk offers insights into how his success can be translated into any organization’s business model.

The event will be a benefit for the MedAssist and Project Access Programs. MedAssist provides access to life-saving prescription medications at no charge to qualifying residents of Marion and Polk Counties. Project Access began in April 2009 to provide access to free healthcare for those in our communities most in need through a volunteer partnership of local physicians, hospitals, surgery centers and clinics. Since April 2009 over six million dollars of donated services have been provided to patients through Project Access. Recent statistics show that for every dollar donated to the programs, $33 dollars of prescription medicines and medical care is being provided to clients.

There were some initial concerns that the volcano in Iceland may affect the President’s visit, as he had originally planned to travel to the U.S. from Europe. Larsen said, “We were pleased to hear he will be coming to the states directly from South Africa and everyone is very excited about his appearance.”

An anonymous benefactor has donated tickets to local high schools and colleges for students who are interested in international relations. The North Salem High School Nordic Choir will perform songs from South Africa during the event.

For more information about the event or MedAssist and Project Access, visit http://www.mpmedsociety.org or call 503-362-9669.

Members of the media are invited to attend the event. Please contact the Marion-Polk Medical Society office at 503-362-9669 for press attendance.